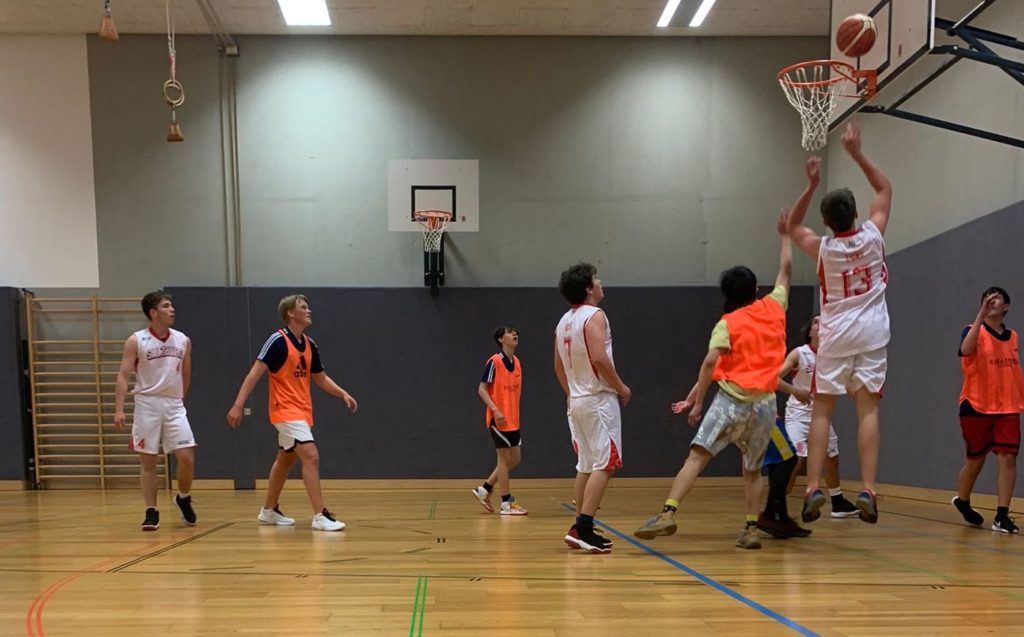 This past Monday night, our boys’ and girls’ basketball teams were back in uniform as they traveled to St. Gilgen for matches with our friendly cross-town rivals.

The girls played first and St. Gilgen had something to prove after losing to the Lions at our Jamboree Tournament in March, coming out with a lot of intensity at the start of the game. The Lions were on their heels for the first half, feeling the effects of not having practiced basketball in almost a month after the change back to volleyball this spring trimester.

As the game progressed, the Lions began to find their rhythm and connected on multiple plays. When the final buzzer sounded, the exhausted Lions had held on to a 37-29 win in what was a very scrappy game.

Saskia R. led the way with 23 points, Nicole I. with 6, while Jade R., Chanti S., Barb A., and Ola T. scored a basket apiece. The highlight of the game came when 5’3″ junior high point-guard-in-training, Chanti S., refused to move out of the way and successfully took the charge against St. Gilgen’s top player, 5’10” Stormey—saving what would have been an easy basket.

This final win concluded the season for the Lady Lions, bringing their record to 7-2. 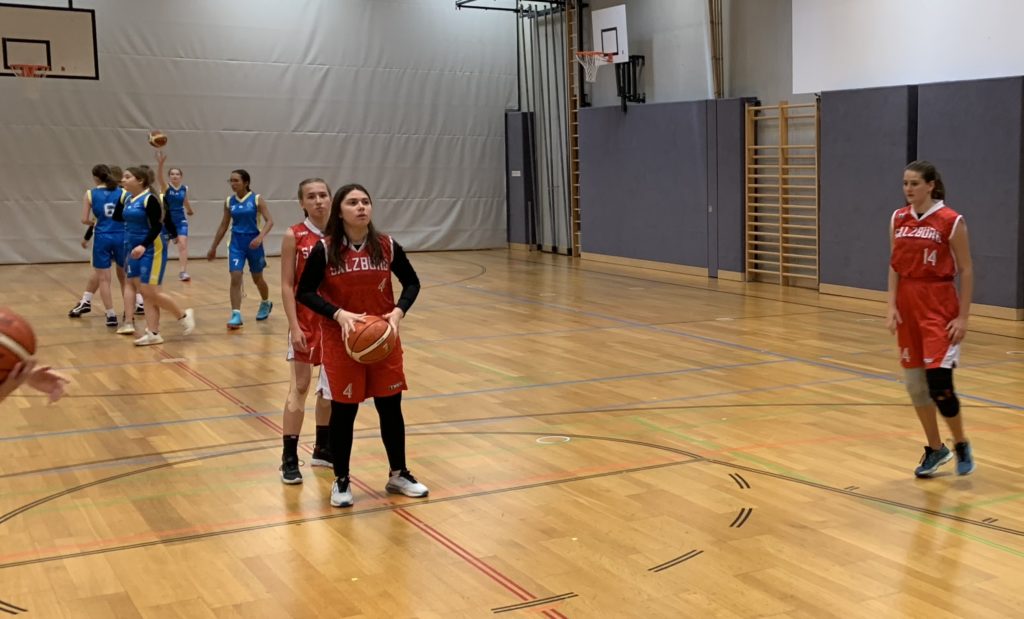 The boys’ basketball team did not fare as well, losing their game 34-24 behind a valiant effort. St. Gilgen had the age and size advantage, as the Lions’ were without all of their senior players and half of the team were junior highers. St. Gilgen jumped out to an early 12-0 lead before pulling their starters for the younger players. With the playing field even, the Lions battled back, showcasing their young talent and bright future ahead.

The Lions finished their season with a record of 3 and 6.

Coming off of their monstrous win against Vöcklabruck, the boys’ basketball team was riding high and full of confidence. Then COVID hit in the week leading up to the festival in Stuttgart, resulting in a number of players being left behind in quarantine. Despite the setback, the boys banded together at the tournament and showcased their commitment to defense, hard work, and basketball intelligence.

After a slow start in their first match, the boys really locked in on defense and kept the game within single digits for most of the 1st half. Then a tough third quarter allowed Stuttgart to pull away. The final result was a 43-61 loss but the boys showed a lot of improvement throughout the game. 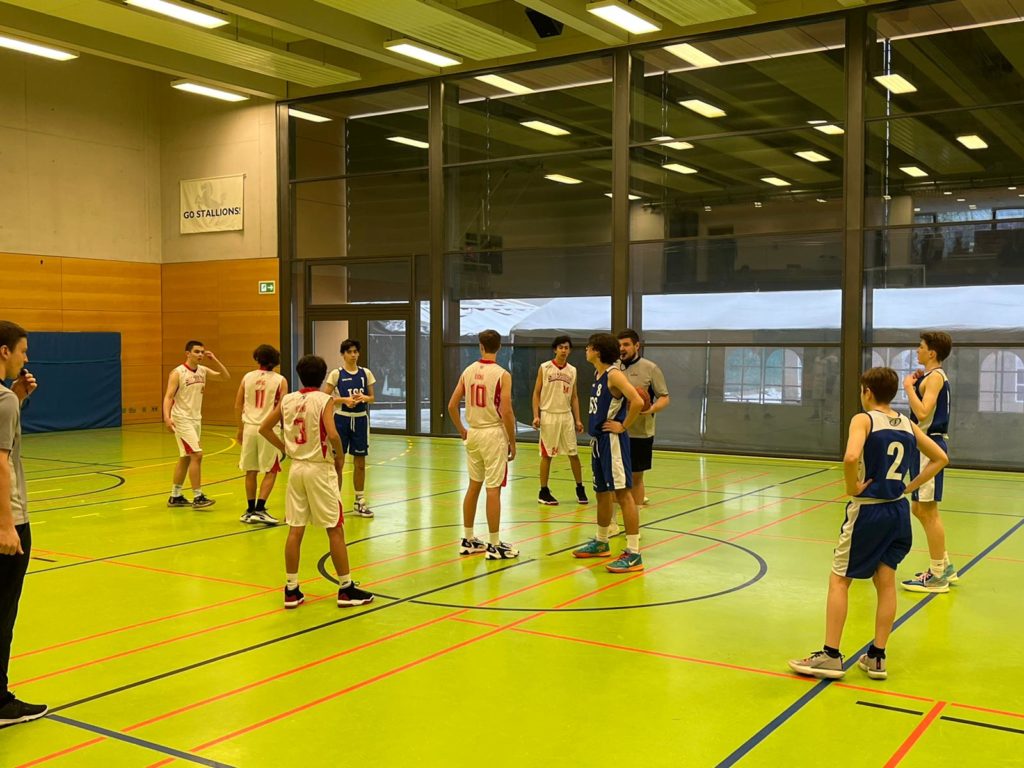 In the second game vs Ulm International School, the goal was the same as always; jump on the other team right away by scoring first, play hard on defense, and execute offensive plays.

“For the first time since I started coaching at AISS, we actually did it! We got up early, we stemmed their run, maintained the lead the whole time, and had a solid wire-to-wire win,” said a proud Coach DeWitt on Monday.

The shining moment for Coach DeWitt was when he called a time out and drew up an out-of-bounds play that the team has yet to execute properly this season. This time, however, the boys ran it really well and even though they missed the shot, they were able to draw a foul and get two free shots out of it.

“It is a huge luxury as a coach to know that you can trust your players to execute properly out of a time out and score points when they are most needed,” said a satisfied Coach DeWitt of his team.

The final result was a 64-34 victory for AIS-Salzburg. 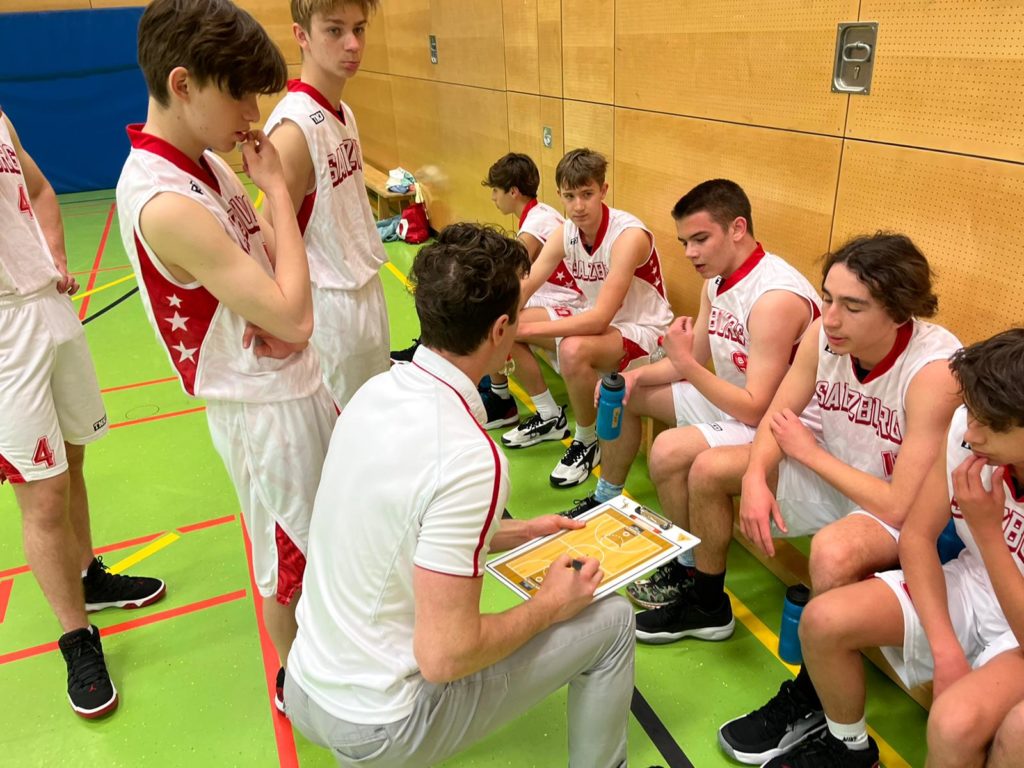 With the win the boys set a recent history Lions basketball record by scoring 63 points in a game.

“It was a very successful tournament. Every single one of my players scored at least one basket. I am very proud of all of them and look forward to building on this momentum for the remainder of the year and going into the 2022-2023 season. A special congratulations to my seniors Andi and Zach. Thank you for your commitment and hard work this season. I am so proud of how far you two have come as players and wish you all the best after graduation.”

The girls’ volleyball and basketball teams also took to the road this past weekend, traveling together for competitions against the British International School Bratislava.

Up first were our volleyball girls—many of which are also on the basketball team—as they faced off with the first of two teams from BISB. The Lady Lions started off slow, still trying to find their rhythm after a long layoff during the basketball season, losing the first set 15-25. In the second set, Sarah rediscovered her serve and went on a 9-0 run to give the Lions a nice lead to start the set. Saskia also had her best day on the service line in this set, smashing the ball over the net for multiple points. In fact, the team as a whole played well behind improved communication and more consistent serving. 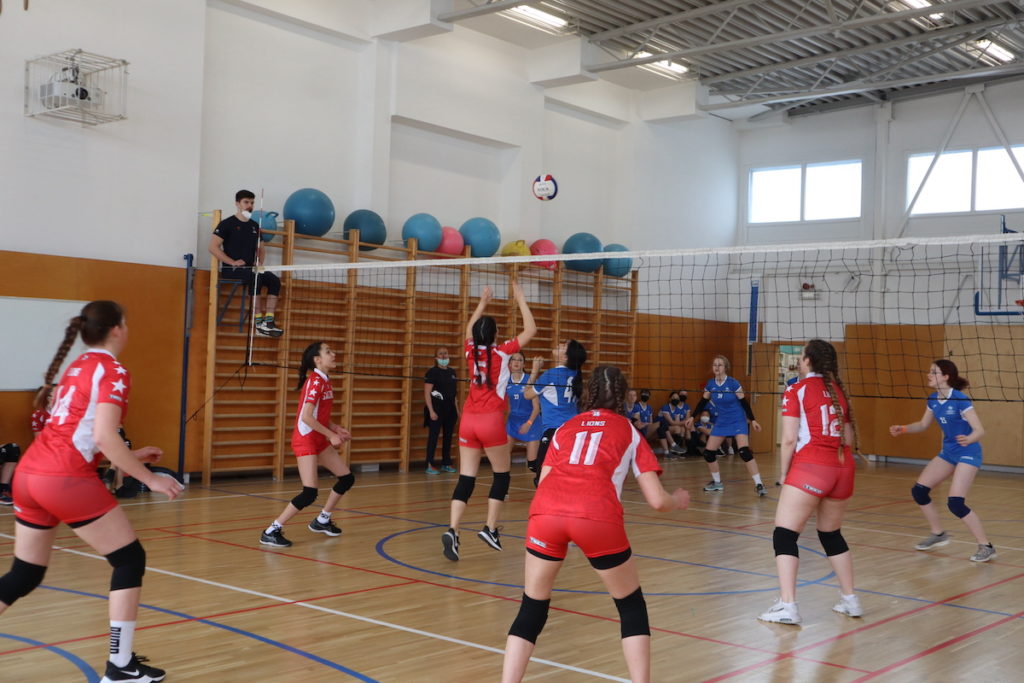 BISB did not roll over and slowly cut the Lions’ lead down over the course of the set. With the score 24-21, it appeared the Lions were about to tie the match up 1-1 before everything fell apart. A missed serve led to the top server of BISB rotating to the service line. She proceeded to smash the ball over the net as the Lions began to stiffen up under the pressure. BISB ended up rallying all the way back for a 26-24 win.

Next up was the second team from BISB, which had just beaten their first team in the meantime. Coach Burns went with a younger, less experienced lineup in this match which competed very well against the second squad of BISB. Despite a valiant effort and some good moments, the Lions fell short again losing 18-25 and 20-25.

A major bright spot on the day was grade 8 setter Egla, who stepped up big time in the absence of Chanti and gained a ton of valuable experience that will pay dividends in the long term for the Lions. Sarah was named Most Valuable Player for the Lions.

“We are definitely rusty and can use a few more practices. We were out of sync the majority of the time. With that being said, we somehow still managed to make it competitive against two varsity level teams,” said coach Burns of his team.

Following a lunch break, the Lady Lions basketball team was up as they looked to continue with their winning ways following a two-week break from competition since their home tournament, Jamboree. In the absence of a number of girls who did not make the trip, two of the volleyball girls had to suit up for the basketball team.

During the warm-up, it quickly became apparent that the Lions were in trouble as the team from BISB were older, bigger, faster and much more experienced in the game. The Lions, on the other hand, had only 6 girls on the basketball team represented, two of which are in grade 8 and had not played all season.

“I thought to myself ‘uh-oh’,”laughed coach Burns. “In the past, this school did not have a strong basketball program, so to say the least, I was quite surprised by how strong they were. They were definitely the toughest team we faced all season.”

Despite the mismatch, the Lions played beyond themselves in the first quarter, even scoring the first basket of the game. As the game progressed, BISB began to take over and swarm the Lions. The Lions managed to play some good defense and keep the ball out of their basket, for the most part, only trailing 4-2 after the first quarter.

Then the wheels began to fall off as the Lions started to gas out, especially those who played volleyball earlier, which included top player and captain Saskia who had played the entire time.

From the second quarter onwards, the host team dominated the play in dramatic fashion, scoring multiple uncontested layups and showing no mercy in the process. The Lions lost 54-10.

Despite the lopsided score, the Lions never gave up and fought to the final buzzer. Saskia scored all ten points for the Lions and was named Most Valuable Player for the Lions.

“Even if we had our full squad this would have been a tough team to beat. The girls learned this weekend that there are levels to this game and that we have a lot more work to do. In the end, we can be proud of the progress we made this season, especially when considering that most of our girls are absolute beginners and our current record is 6-2.” 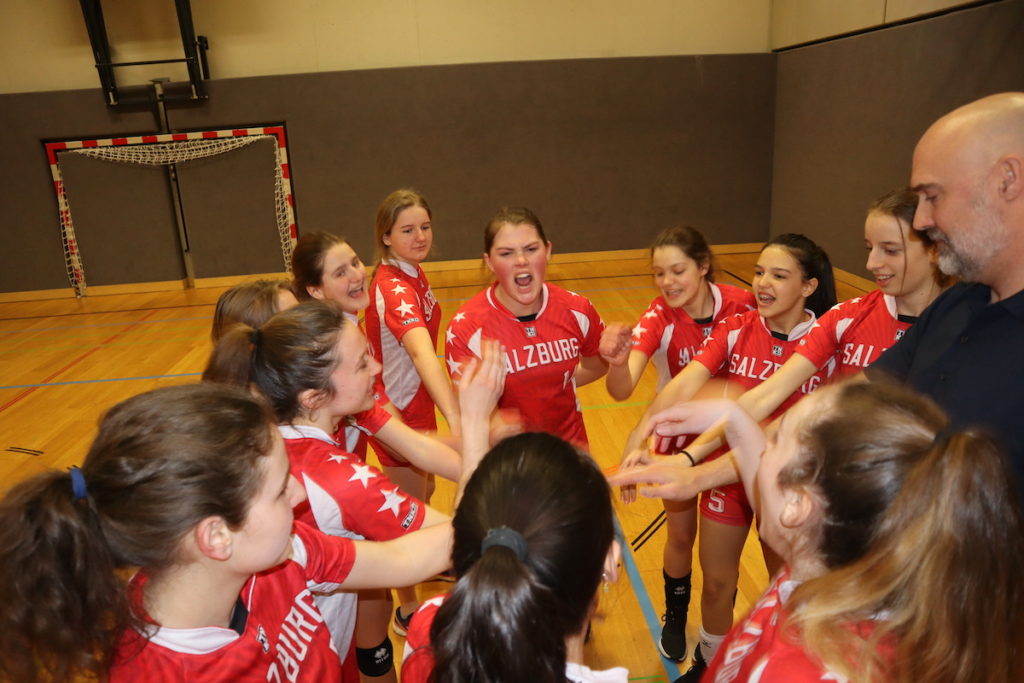 The girls volleyball team dusted off their volleyball uniforms after a long break during the basketball season and took their game on the road to St. Gilgen for a rematch from the fall. The girls beat St. Gilgen in a thriller match back in October that went to the third and final set after a 1-1 deadlock.

The two teams picked up right where they left off, in a close back-and-forth battle that saw the lead exchanged multiple times, with each team winning a set 25-20, finding themselves in a deadlock once again.

With the match on the line and the Lions losing 24-23 in the third and final set, Jade had nerves of steel on the service line as her successful serve helped the Lions to tie it up at 24-24. However, it wasn’t meant to be on this night as the Lions lost the next two points, thus evening up the Salzburg rivalry at one match apiece. 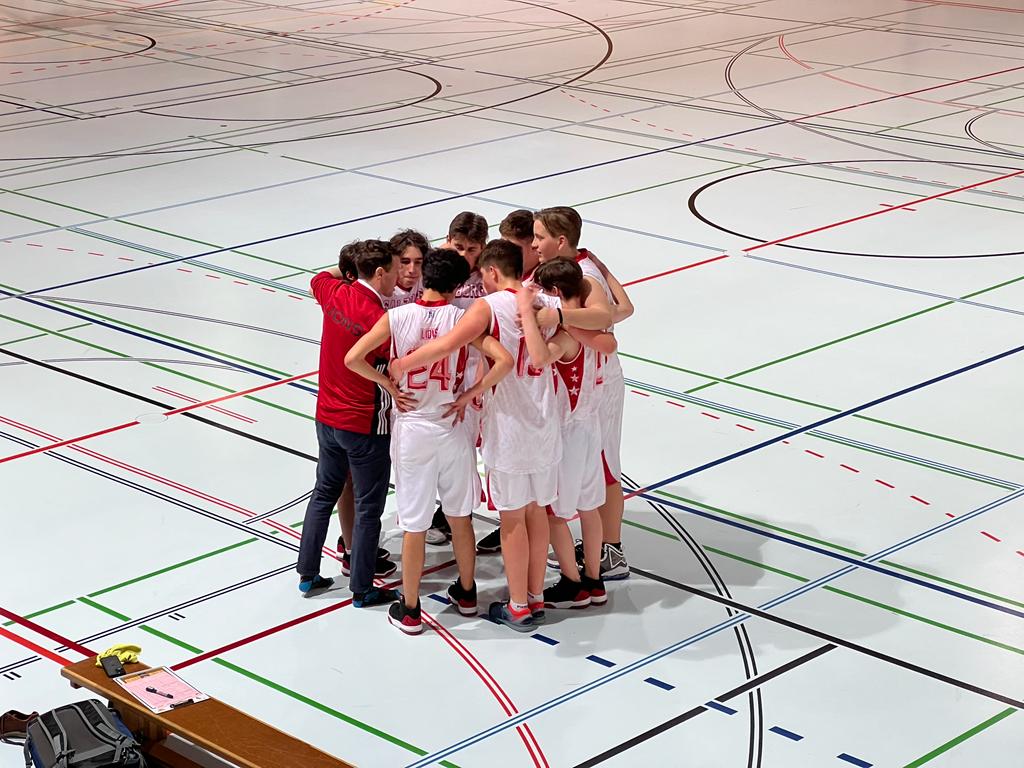 The boys’ basketball team didn’t really know what to expect going into their game against the Vöcklabruck U16 club team on Tuesday night. Upon arrival, they quickly discovered that the other team was young and inexperienced, which was a good opportunity for coach DeWitt to play some of his younger players.

“I told my boys that no matter what the score was we wanted to continue to play the right way. Work hard on defense and execute on offense,” said Coach DeWitt following the game.

The Lions came out right away and executed their game plan, jumping ahead to an early 10-0 lead. The game continued with that trend throughout, never being a competitive match with the boys cruising to a 58-16 win.

Our young Lions’ team was able to gain a lot of valuable experience, working on their full-court press and offensive sets throughout the game.

“We played so well that I eventually subbed in all my Junior High players and had Ander play point guard. He had never done this before and was very nervous but I told him he would do fine. He ended up as the third-leading scorer on the game,” beamed Dewitt of his young protege.

“All of the boys played well and I am proud of all of them. I can’t wait to see what we are able to do next.”