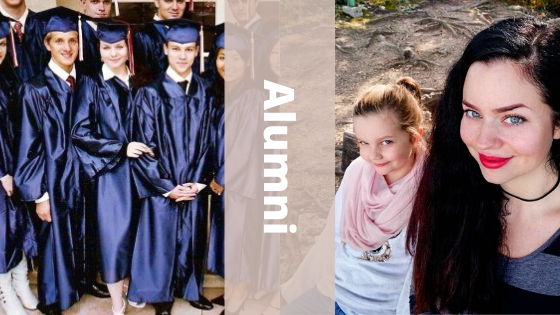 What year or years did you attend AIS-Salzburg and at what grade levels?

Are there particular AIS-Salzburg moments or memories that have stayed with you over the years?

Oh my, there are so many! I think the most notable memory though, is approaching “the big yellow building” every morning and feeling that anticipation of what could happen.

Have you remained in contact with any former AIS-Salzburg classmates and if so, who?

Absolutely! Some I don’t get to see very often, unfortunately (luckily social media helps there), others on a monthly basis!

What have you done academically and professionally since graduating from AIS-Salzburg?

After graduating from AIS I moved to China for a year to study Chinese. Then, I applied to Kingston University in London to study Computer Security and, although I was accepted, I decided to move to Minsk, Belarus to study it there instead. After about a year I realized that my calling was in China and so, I moved back to Shanghai. I continued studying Chinese but drifted away from Computer Security and towards Business instead. All the while I actively participated in the English language theatre scene.

A week after graduating from University I gave birth to my daughter and only focused on being a mom for a while. I was eager to get back into work life and to combine my business knowledge with my love for the theatre arts. So, I opened my own theatre company and became its executive producer. From small shows to musicals, it was all covered.

On the side I also took on establishing the Drama department of a private school in Shanghai where I worked closely with nearly 500 students on a weekly basis for the next 4 years. Challenging? Yes. Fun and rewarding? Definitely.

After nearly 13 years in Shanghai, I moved back to Salzburg where I’m now working as Creative Content Production Manager for the fashion label‚ Quipster‘. Other than that, I  continue to work on projects in both film and theatre with the goal of building a bridge between Salzburg and Shanghai at some point in the not too distant future.

What aspects of your education at AIS-Salzburg best assisted you in further academics and/or professionally?

I couldn’t pinpoint it. I think it was the entire “experience”. AIS-S contains the whole world within its walls. The diverse cultural backgrounds that makeup both the student body and the staff, open your eyes to what’s out there. Through this diversity and a great academic curriculum, the world is opened up to each and every student giving them something so valuable; OPTIONS.

Are there any personal accomplishments since graduating that you want to share?

Sure! I have a beautiful and healthy daughter, a Theatre company, I speak a few awesome languages and I have a bunch of plants in my garden that are actually growing! #superproud

Do you have any advice for students at AIS-Salzburg or applicants to the school?

Power through the challenges and don’t be lazy. Remember, these few years go by so much faster than you can even imagine. Also, don’t ever be satisfied living in your comfort zone. You’re not going to achieve anything there.